I'm embarrassed to say that I only truly discovered the music of John Prine this year. I knew who he was, and I had heard his music before, but it just never quite clicked for me until earlier in 2021. It was through covers of his brilliant songs that finally made me give him another shot, and I was wrong before because the man is just a true treasure. As part of their "12 Days of Tickmas," Deer Tick have released a cover of "Christmas in Prison." If you're familiar at all with John Prine and Deer Tick, you're going to know what this sounds like. And you'd be correct. It's a classic country/folk ballad from Deer Tick with just enough rock guitar to make it sound like Deer Tick. It's a fantastic cover dripping with adoration of the original. You need to check this one out.

You can watch Deer Tick cover "Christmas in Prison" below. For more on Deer Tick, check out the band's website. Current tour dates are below the video. 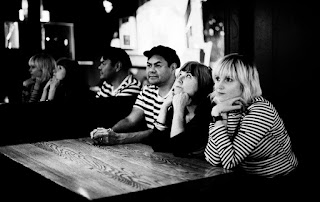 Artsick hail from the Bay Area and are considered indie pop, but their latest single is well worth a listen even if that label doesn't appeal to you. "Ghost of Myself" is pop, sure, but it's hardly top 40 pop. Instead "Ghost of Myself" is closer to the pop of an artist like Bis. It's hyper fast paced and sugary as it could possibly be with impossibly jangly guitars, but it also has more of a punk edge than you would expect from something labelled pop. It's a great sound that plays in the worlds of pop, punk, and indie rock without committing fully to any of those.

You can watch the video for "Ghost of Myself" below. Fingers Crossed is due out January 21 on Slumberland Records. You can pre-order/pre-save a copy here. For more on Artsick, check out the band's Twitter and Instagram. 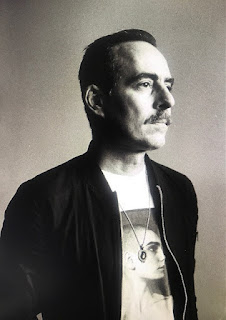 It feels like it's been forever since we had new music from Ted Leo, and it kind of has been forever. His last album with the Pharmacists was back in 2010, and The Both (his band with Aimee Mann) released their album in 2014. Aside from a solo album in 2017, that's really been it. The now Rhode Island based artist is back with a new song under the name Ted Leo & Jeppesen Airplane. "Into the Conquering Sun" is their first single, and it's going to make people really thrilled. It has some massive Clash vibes, but with Leo's trademark catchy pop hooks. It's kind of like if folk punk was far more punk than folk, although this song isn't even remotely folk. There's also some guitar work that's almost prog, so "Into the Conquering Sun" is gloriously all over the place.

You can listen to "Into the Conquering Sun" below. The song is available now via Bandcamp. For more on Ted Leo, check out the artist's website.


Last month we noted that "Love Light," the new single from David Wax Museum, sounded like their take on neo-soul. After hearing the band's latest single, it seems like their upcoming album may be their neo-soul album. With "Georgette" the soul vibes may be a little more subtle but they are still there. It's an upbeat while laid back song that features Wax crooning like we've never heard him do before. What gives "Georgette" such a unique sound is that the music and Suz Slezak's backing vocals and harmonizing have a lot more energy to them than Wax's laid back vocals do, which works perfectly. Plus, musically the song brings David Wax Museum further into the left of center folk music trajectory that they've been on for the last few albums.

"Not quite ready for the holiday music bonanza? Need something peppy but slightly left of center, perhaps a song that addresses our ambivalence to our littlest technological devices. Well, then we've got the song for you!"

You can listen to "Georgette" below. Remember My Future comes out December 31. For more on David Wax Museum, check out the artist's website. Upcoming tour dates are below the song.


According to their press release, Boston's No Nations is a mix between post-hardcore, shoegaze, alt-rock, and grunge. The sextet's debut single, "Seltzer," somehow contains all of those sounds inside of four and a half minutes. The song is a loud and discordant burst of guitars and changing tempo. At no point does "Seltzer" consist of just one of those genres and is just a giant mass of noise that is as melodic as it is noisy. It's somehow both a more and less mainstream version of At the Drive In in a single song. This may not be everyone's cup of tea, but those of us that love it are going to really love this.

“The musical vision for No Nations I think tries to fuck with alot of the stuff I loved about getting into music in the first place. There are some heavier, driving rhythms that I got from playing punk and hardcore. There is some guitar interplay that takes from early ‘90s alternative music. There are melodies and melodic interplay I dig from mid- to late-’90s emo. I also love fucking around with some of the repetition of Krautrock where a simple pattern repeats and there is stuff that builds around it. Overall, I think a lot of this reflects our experiences playing in bands before. Most of us played mostly in hardcore bands and listened to alternative music in our down time so I think there is an element of that.”

You can listen to "Seltzer" below. The song will be available on a two song cassette in January. For now you can find the single over at Bandcamp. For more on No Nations, check out the band's Facebook and Instagram. 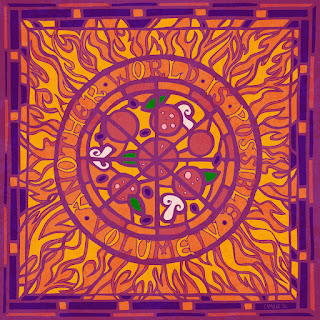 Somerville, MA's Emperor Norton's Stationary Marching Band has released their fourth holiday EP in what is now a delightful annual tradition. Another World is Possible Vol IV - MORE Soon-To-Be Holiday Classics features three songs done only the way ENSMB can. As the band's Bandcamp profile states, their music is "A joyful cacophony of Balkan, Klezmer and funk, with a tasteful thrash of metal thrown in for good measure." The first song is a take on Tom Lehrer's "Hanukkah in Santa Monica," and couldn't we all use more Tom Lehrer in our lives? ENSMB bring all the zaniness if Lehrer's original and may be the perfect band to cover this one. The other highlight is the original holiday song "One Large Pizza for Christmas" about burning Christmas dinner so badly the fire department comes and you end up having to order a pizza for Christmas dinner. Yeah... it's pretty great and should be a holiday favorite for years to come.

You can listen to "One Large Pizza for Christmas" below. Another World is Possible Vol IV - MORE Soon-To-Be Holiday Classics is available now via Bandcamp. For more on Emperor Norton's Stationary Marching Band, check out their website.

Monday Mix: The Best of Christmas 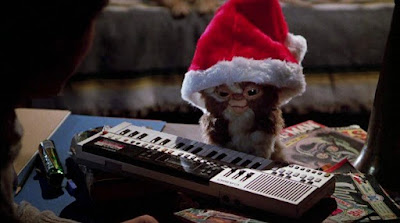 Forget your traditional stuff, we like our Christmas music to be modern, dumb, or dumb and modern, so here's a ton of Christmas music to put on shuffle and enjoy with/annoy the family. Subscribe and check back, since we'll probably be adding to it over the course of the season.
Posted by Jeff Raymond at 7:25 AM No comments: 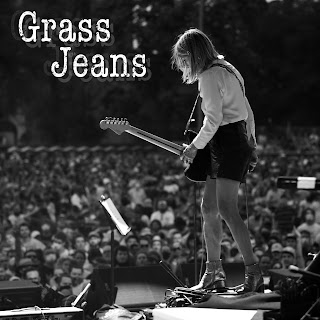 Kim Gordon released her first solo album back in 2019, and now she's released a new single. "Grass Jeans" keeps the vibe of Gordon's album No Home Record but it's also the closest she's sounded to vintage Sonic Youth since Sonic Youth. "Grass Jeans" has the electro rock and art rock sound that her album had, but there's also some strong hints of early No Wave Sonic Youth. There is a ton of noise and aggression here, but you can also groove to it.

Obviously, Kim Gordon is not going to be a fan of the recent anti-abortion laws in Texas. "Grass Jeans" is a fundraiser for Fund Texas Choice. In a Facebook post, Gordon says of the new song:

"I often get asked 'Can music change things for people in a political landscape?' Hell yes it can . . . but it takes a listener, an audience to make it anything. So please join me in helping to protect and keep accessible a woman’s right to choose her fate by purchasing this song and supporting Fund Texas Choice and their collective efforts to secure abortion access for all. Thank you. It means so much."

You can listen to "Grass Jeans" below. You can get a copy of the song here. For more on Kim Gordon, check out the artist's website. For more on Fund Texas Choice go here.


Iceland's Arny Margret has just released her debut single. "intertwined" is a gorgeous song that straddles the line between singer/songwriter and folk. It's composed of Margret's vocals and acoustic guitar. The song is stunning in its simple beauty. Margret has this instantly compelling vocal style that feels perfectly familiar despite not sounding quite like anyone else. "intertwined" is a mesmerizing debut single that is going to have you rushing to all of Margret's socials to make sure you don't miss a follow up.

“Past experiences kept coming back to me while I was alone, and all these feelings mixed with the weather and the trees somehow. I dreamt about these things, and I came up with the lyric ‘our pasts are intertwined,’ as if you’re connected to someone even if you don’t want to be.”

You can listen to "intertwined" below. The song is available as a single via One Little Independent Records, and can be downloaded at Bandcamp. For more on Arny Margret, check out the artist's website. 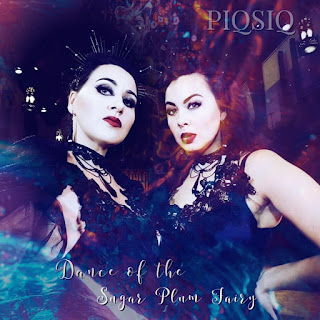 PIQSIQ (pronounced "pilk-silk") are an Inuit sister duo (Inuksuk Mackay and Tiffany Ayalik) that have released a cover of Tchaikonsky's "Dance of the Sugar Plum Fairy" from The Nutcracker Suite. It's a holiday classic that you've heard to death if any of your kids are into dance. But PIQSIQ's rendition is an a capella version. It's just vocalizing for a classical instrumental song. This is obviously not for everyone, but if you're a fan of Petra Haden's a capella releases, or just enjoy odd little songs to put on a holiday playlist, you're going to enjoy this one.

You can listen to PIQSIQ's take on "Dance of the Sugar Plum Fairy" below. The song is available for download via Bandcamp. For more on PIQSIQ, check out the artist's website.