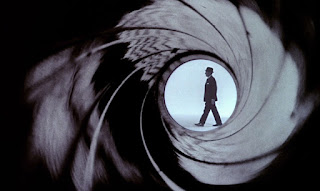 I am super excited about the new James Bond movie coming out on Friday. I've been a fan of the series for as long as I can remember, Daniel Craig is probably my favorite Bond at this point, and Sceptre is basically something I am heavily looking forward to seeing as soon as I can.

What else is great about the Bond movies are the theme songs. Yeah, some are pretty rough, but others are actually really solid. So what better way to present an often-rare Monday Mix than via a completely subjective ranking of the Bond themes. The countdown, as well as the Spotify playlist, is worst to first. Enjoy!


23) Gladys Knight - "License to Kill": One of the few Bond themes not on Spotify (thus the tribute in the playlist and the YouTube link here), the fault of this one is how uninspired it sounds as well as how poorly it holds up over time. Gladys Knight deserved better.

22) Madonna - "Die Another Day": I typically look fondly upon Madonna's full dive into electronica at the turn of the century. There is nothing iconic or interesting or even worthwhile about this theme, though, and feels woefully out of place both for the era and the series.

20) Sheena Easton - "For Your Eyes Only": Another song not on Spotify, but I think we're all a little better off because of it. Just bad dated 80s stuff.

19) a-ha - "The Living Daylights"
18) Sheryl Crow - "Tomorrow Never Dies"
17) Garbage - "The World is Not Enough: In all three of these cases, it's the wrong group doing the wrong song. Sheryl Crow was pretty solid at times, especially in this era, as was Garbage, and yet these songs overall just failed to connect.

16) Sam Smith - "Writing's On the Wall": This is the Sceptre theme, and it's a tough act to follow after Adele's theme. Sam Smith doesn't really have the right voice for a Bond theme, I think, even though I understand why he was chosen and what the point of it all was. This is more disappointing than unfortunate.

15) Chris Cornell - "You Know My Name": The Casino Royale theme, it works in context given how much the Craig Bond is a reboot of sorts, but it's overall a thematic error and, frankly, not a great song by any means.

12) Nancy Sinatra - "You Only Live Twice"
11) Carly Simon - "Nobody Does it Better"
10) Lulu - "The Man With the Golden Gun": We're quickly moving into the better Bond themes, and both Carly Simon and Lulu do great ones that have a lot of iconic moments in them, but don't quite hit the heights you'd expect. Nancy Sinatra has possibly a better song, but I don't know if it's the better Bond theme.

9) Paul McCartney - "Live and Let Die": Sir Paul's theme is much higher energy than you might expect from a Bond theme, and it largely works. A lot of my personal perspective on this comes from the Guns N' Roses version, but the fact that it holds up this long after the original recording is a testament to how good it is.

8) Matt Monro - "From Russia With Love"
7) Shirley Bassey - "Goldfinger": These are both two of the more iconic takes on the Bond themes, and "Goldfinger" in particular is often the type of song you think of when you think of Bond themes. I very easily could have ranked this one higher.

6) Duran Duran - "A View to a Kill": While so many of the lower-tier songs are dated and exist solely within the era they were performed, "A View to a Kill" succeeds by keeping up with the era as well as retaining some of the iconic flair (most notably the Bond horns). I love this song. Fun fact: this is the only Bond theme to hit #1 on the United States Billboard charts.

5) Alicia Keys and Jack White - "Another Way to Die": The theme for Quantum of Solace, I love this take on the theme. It's different while still retaining a lot of the same ideas and themes throughout, and the mix of Keys and White is one that shouldn't work and does. This is absolutely a more divisive theme in the canon, but I firmly fall on the "this is brilliant" camp.

4) Adele - "Skyfall": Adele is absolutely going retro on this one, and it works. Easily the best modern theme, and it's not even close.

3) Shirley Bassey - "Diamonds Are Forever": Shirley Bassey is the iconic voice of the Bond themes, and I fully and completely see this as the theme I think of when I think Shirley Bassey Bond themes. The brass section is perfect, melody right on target, and the pacing just works. Definitely a top theme.

2) Tom Jones - "Thunderball": Is there any doubt? This has everything going for it, plus the right male voice for a Bond theme, plus it's actually still pretty funny in a few ways. It's hard to not see this as one of the great sung themes of the time.

1) John Barry - "On Her Majesty's Secret Service": Sometimes, when you have to find out what the best Bond themes are, you have to cheat a little. "Majesty's" is more the action theme to the film of the same name than the theme itself, which could either be considered the main Bond theme that begins this playlist or the Louis Armstrong love theme, but I absolutely think this needs to be considered as the top theme. It works too well, is too iconic, and, as we'll learn later this week, has been reinterpreted very well as well. When I think Bond? This is what I think of.

Disagree? Thoughts? Share in the comments!
Posted by Jeff Raymond at 7:30 AM