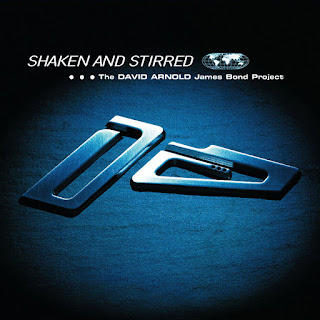 With Sceptre out in the United States today (hooray!), I thought it might be fun to revisit this little piece of nostalgia from 1997, David Arnold's Bond theme cover project, Shaken and Stirred.

Remember, 1997 was the height of the electronica boom, and David Arnold had scored a number of films in the past and was a big Bond fan. So he reworked some of the Bond themes and songs electronically, added some interesting vocalists to the mix, and released this compilation. The album itself became a hit, especially in the United Kingdom, and led to David Arnold being tapped to score a number of Bond movies following this release.

This wasn't on Spotify back when Skyfall came out, so I'm glad that it's finally been posted. The whole thing might feel a tad bit dated nearly 20 years later, but I'll say this much: Aimee Mann's take on "Nobody Does it Better" rivals the original, Leftfield's contribution to "Space March" still holds up today, Chrissie Hynde (of The Pretenders) has the perfect voice for "Live and Let Die," and The Propellerheads taking on "On Her Majesty's Secret Service" remains an all-time favorite interpretation of any song period, never mind in the Bond canon.

So let this get you a little hyped up. It's definitely a fun Friday piece to mix into the day's new releases.
Posted by Jeff Raymond at 7:30 AM