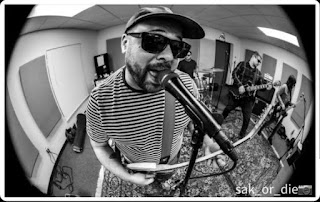 Albany's Postage are making killer pop punk songs, the latest of which is "80-85." It's a love song that edges into emo territory, but in the absolute best possible way. It's still rough and totally punk, in the way that a band like ALL could still be. If anything, to me it sounds like Rites of Spring trying to write a hit song. It's loud and fast and abrasive, but it's also undeniably catchy and fun.

In a press release, guitarist singer Mike Moak says of the new song:

"'80-85' is the first song I wrote for Postage before the band officially started. I was playing it at Fest’s and shows when I’d be booked for solo / acoustic sets. People immediately started singing the chorus before the song had even been recorded, I think that’s a first for us. It’s just a catchy love song, listing off a bunch of good records. Annie Pressman did the guest vocal on the bridge. 80-85 is also the title from a Bad Religion release of their early discography, when I was a kid I use to cherish that cd and stare at the cover and just admire how fucking punk and cool it was…and how great the songs are. I loved it and I still do."

You can listen to "80-85" below. LP1 is due out November 5 on Dirt Cult Records. You can pre-order a copy here. For more on Postage, check out the band's .