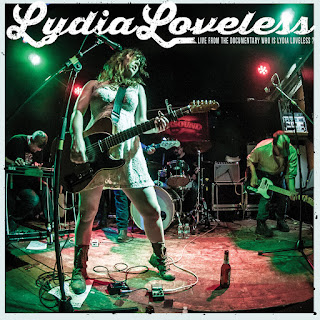 I raved about the documentary Who Is Lydia Loveless? way back in 2016. As much as I loved the view into what the life of a club level up and coming band was like, the live performances were the true draw of the film. Spread throughout, they showed a band at the very height of their live performance powers. The audio recordings have been released previously on vinyl, but they are finally available digitally.

Right from the first track, "Out On Love," you know this one is going to be special. It's a drone heavy song filled with far more indie rock fuzz than Lydia Loveless' trademark alt-country. Plus, she's just belting this one out with an amount of sheer emotion that is going to effect you no matter who you are. "More Like Them" brings the rock back into it, just threatening to careen off the rails and somehow keeping it together, but just barely. The absolute pinnacle of the release is the live version of "Boy Crazy." In the documentary, it is said that the band typically only pulls this one out at shows that go very well or very bad. I'm not certain which this was, but it must have been a doozy.

You can listen to the live version of "Boy Crazy" below. Live from the Documentary "Who Is Lydia Loveless?" is available via Bandcamp. For more on Lydia Loveless, check out the artist's website.