Forgotten Friday: Kenickie - At The Club 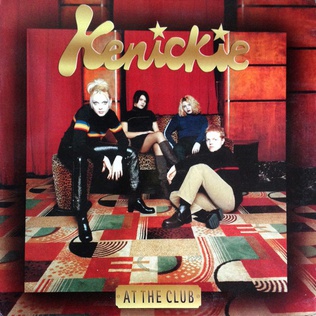 Way back in the 1900s, if we had never heard of an opening band we had virtually no way of checking them out before the show. You either got there late to miss them or watched them blindly. Either way it was a roll of the dice since you could miss out on a life changing opening (Mogwai opening for Pavement comes to mind) or sit through the worst thirty to sixty minutes of your life. When I saw that dog. at The Middle East in Cambridge back in 1997 (I think?), I got there early enough to see Kenickie. It wasn't life changing, but I came back with a band I played constantly on my college radio show for the rest of the year.

Kenickie (obviously named after the character from Grease) lasted a mere four years and put out two albums. Hailing from Sunderland, they got pumped into the Britpop genre, which is pretty fair but they also combined pop punk and power pop into their sound. Their 1997 debut album At The Club is a combination of hyper Britpop singles mixed with some more lowkey power pop/alt-rock album tracks. There's a lot of electronic experimentation going on here, which makes sense in the post-Trainspotting scene.

Listening to At The Club in 2021, it's surprising how well it holds up. The big singles, "In Your Car" and "Punka," seem a bit more dated than the rest, but that's only because all Britpop does in retrospect. The rest of the album definitely sounds like the mid-late 90's, which is when it was made, after all. It's shocking how many sounds this album encompasses. It bounces wildly between indie rock, Britpop, power pop, post-grunge, etc. from one song to another. While I consider that a huge plus, I wonder if the genre hopping turned off some listeners at the time. The crowd at The Middle East was an ultra-hipster one that didn't seem amused at a band that existed for pure fun. It's rare that I would have been the least jaded in a crowd, but I'm glad I came out of that night with a love of Kenickie.