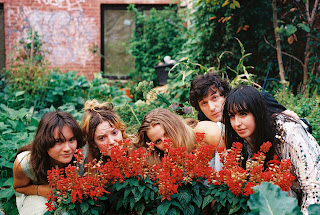 Brooklyn's Gustaf have been playing sold out shows around the country despite not having any released any recorded music. That's now changed with the release of their debut single "Mine." "Mine" is a burst of groovy art-punk, like a more raw version of The Julie Ruin or if Bodega decided to be less of a party band. That's not to say that Gustaf aren't fun. There is plenty of humor in this song, and it's one of the most dance friendly post punk songs we've heard in months. But "Mine" is dripping with some of the most biting attitude of this year, which is saying a lot.

"This song is about having a false sense of entitlement. Someone who feels attacked or like they're being pushed out of their own world and not getting the credit they deserve. Someone with a delusional sense of self whose anger and frustration is humorous like the superintendent in a college frat movie. The opening lines make it seem like the narrator is being criticized by someone else and their retaliation is like 'you’ve got to be kidding me, you can’t say that about me! I invented water you punk!' …. sort of."

You can watch the video for "Mine" below. The song will be available as a single via Royal Mountain Records on December 4. You can pre-order a copy here. For more on Gustaf, check out the band's Facebook and Twitter.