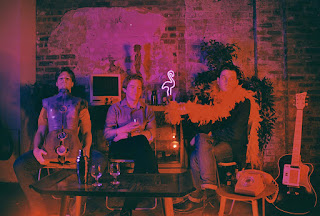 Hailing from Liverpool, Eyesore & The Jinx released a standalone single earlier this month. This is a song that's become legendary with fans of the band, who have wondered about its very existence. "Accidental Weller" is a post punk meets mod song. It's a fun danceable track, despite having this growing aggression building underneath. There are bursts of pure noise that periodically jump out, almost without warning. It's a shockingly intense song, even though it seems like a lighthearted, upbeat track throughout.

Josh Miller of Eyesore & The Jinx explains that "Accidental Weller" "... is a cautionary tale about the urge for transformation in all of us. A timely reminder that you’re only ever a few snips away from a bouffant/ mullet hybrid that belongs on a Vespa with a Union Jack paint job, doing 40 mph on an A round somewhere just outside of Luton. A verbal hand on the shoulder, patting you gently, letting you know that whatever plans you have, big or small, never work out quite like you would have wanted them to, much like this pointless, little year."

You can listen to "Accidental Weller" below. The song is available now via Eggy Records. For more on Eyesore & The Jinx, check out the band's Facebook and Twitter.