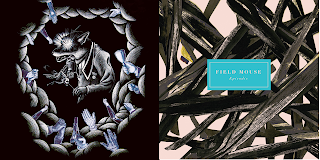 Because sometimes you swap them a dozen times over the course of your final rankings and decide they're both worthy.

For Field Mouse, Hold Still Life was my favorite album of 2014, and the band continues to be a favorite of ours around these parts. The Casket Girls are definitely a band I've come to love at all, with True Love Kills the Fairy Tale a favorite of mine from 2014 even if it didn't make my top ten. With their new albums, we have two bands on two different trajectories, both making for great listens, but for different reasons.

With The Casket Girls, The Night Machines is largely more of the same. It's a solid listen from top to bottom with a great share of dark indie pop, but also just haunting melodies throughout. Field Mouse, in comparison, abandons a lot of the moodier, shoegazey style in favor of a more up-front indie rock affair. In both cases, they end up being addictive listens, both in terms of general musical quality but also in terms of the direction both acts are headed.

Most interestingly, The Casket Girls are doing what is the most unique, but maybe the less marketable. In that sense, I might like The Night Machines more, but Field Mouse just speaks to me on a really visceral level that I can't ultimately escape from. These are both albums I feel like everyone should be enjoying, and yet I don't know if they'll make a ton of end of year lists. They should. And I look forward to what both of these bands are going to put out there in the future.

Recommended for Field Mouse: "The Mirror," "Beacon," "The Order of Things"
Recommended for The Casket Girls: "24 Hours," "Tears of a Clown," "Virginia Beach"