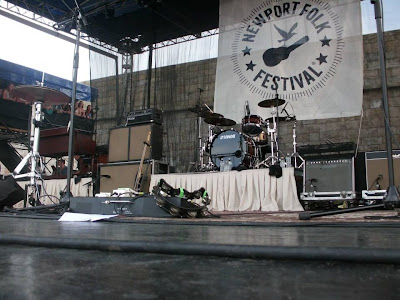 Ah, the 2013 Newport Folk Festival. This might have been one of the greatest weekends of my life. Sure, there weren’t quite as many acts that I was ecstatic to see as the 2011 and 2012 editions, but that just left more room for pleasant surprises and discovery. I had to miss the opening day of Friday, but I arrived bright and early before the music started on Saturday. It was probably the best decision I ever made, as I missed the legendary Newport traffic and started my festival experience stress-free without missing a single band. 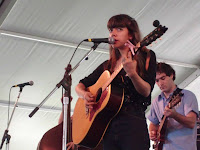 First off, I headed up to the Quad Stage (probably my favorite stage of the festival this year) to see Hurray for the Riff Raff. Alynda Lee Segarra’s voice is haunting on her records, but live it is a whole new level of beauty. Since they just released an album of mostly covers, the fantastic My Dearest Darkest Neighbor, it’s surprising that they stuck with original material. They even brought friends and upcoming fall tour mates, Spirit Family Reunion on stage for a song. Hurray for the Riff Raff’s down-home, mellow sound was a perfectly fitting way to ease myself into the weekend. 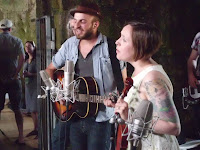 Up next I headed over to the Sennheiser/Paste Magazine Ruins stage for Kingsley Flood. I had to miss Kingsley Flood’s much hyped Friday opening slot, so it was great to be able to see them, even if for a few songs. I’ve seen a lot of other outlets refer to the Ruins Stage as having secret performances, but they had a schedule posted out front with just about every band playing, except for some last minute changes. The Ruins Stage offered a smaller, incredibly intimate space for some of the top bands of the weekend to play, as maybe 10-12 people could watch from the side, a couple dozen standing out front, and the rest watching on TV screens in an adjacent room. Kingsley Flood killed it in this setting. Their blend of roots and folk with a punk edge left me wishing I had more. 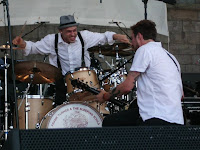 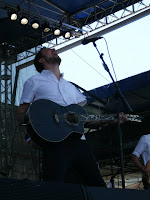 I had originally planned to watch the first half of Frank Turner’s set on the Fort Stage followed by the last half of Shovels & Rope on the Quad. Within the first three songs of his set, I knew I was staying put. While a mid-level rock star in the states, Frank Turner is a full-fledged rock star in his native England, playing the likes of Wembley Stadium back home in England. Backed by The Sleeping Souls, Turner brought the closest thing to punk that Newport has ever seen. After tearing through songs like “There Is No God” and the hit “If Ever I Stray,” he closed with “Photosynthesis,” his English hit about watching your friends start taking office jobs and having kids while you’re still living a rock and roll lifestyle. We at If It’s Too Loud… can almost relate.

After the full set, I headed up to the Quad to catch the end of Shovels and Rope. I was confident in my choice, until I heard them ripping into “Hail! Hail! Rock n’ Roll.” Their comparisons to The White Stripes go beyond the husband/wife, guitar/drums thing. They brought Detroit garage rock that would have made the MC5 proud to their folk/country sound, with a wall of fuzz and distortion that drove some of the more sensitive folks away. If it wasn’t for Turner’s star show on the Fort Stage, I’d have a deeper regret in missing their set. 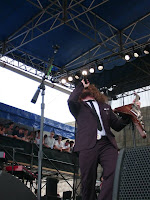 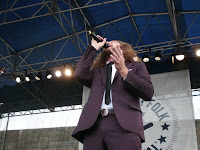 When you’re covering a festival for a media outlet, there are some bands that you feel you need to see. Jim James was one of those. I have never been a My Morning Jacket fan, and his solo set at the 2008 Newport Folk Festival was fairly dull. Even though I started out at his Fort Stage set out of obligation, I was quickly converted. Jim James bridged the gap between jam bands and noise rock. Dressed in a purple suit and going between singing, playing a Flying V, and playing a saxophone, James captivated non-fans, such as me, as well as his diehards. He had an air of theatrics that meshed perfectly with his stage persona and has officially reached indie rock god status. Even if you don’t like his albums, I can’t recommend his live show enough. 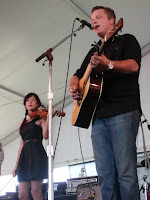 Leaving James’ set early is only a testament to my love of Jason Isbell. His most recent album, Southeastern, is easily his finest work. Taking the Harbor Stage with his wife, Amanda Shires, on violin, Isbell mesmerized the crowd with his soulful blend of country-rock. After busting out two of his songs from his days with the Drive-By Truckers, including “Decoration Day,” Isbell quipped that he was sure there was a Drive-By Truckers fan wondering who the guy was covering all these songs of theirs, and explained that he wrote them. I’m sure most DBT fans were just glad to hear some of their favorite tracks. Isbell and his band brought the rock with a fiery cover of “Can’t You Hear Me Knocking” that would have made Keith and Mick proud. 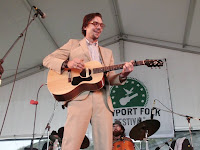 In the best back to back pairing of the entire weekend, Justin Townes Earle followed Isbell on the Harbor Stage. Earle brought an awkward confidence and love of playing to his classic country feel, with just a twinge of gospel to it. He displayed a true love of playing that was missing back in 2011, as closed out the Harbor Stage for the day with songs like “One More Night in Brooklyn,” “Midnight at the Movies,” and “Move Over Mama.” Like Isbell, he closed with a cover: The Replacements’ “Can’t Hardly Wait.” 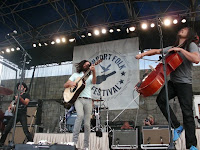 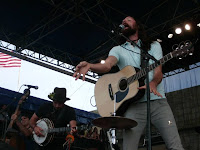 Over on the Fort Stage, The Avett Brothers became the biggest success story in Newport Folk Festival’s modern age. Just five years ago they played the smallest stage available, and now here they were headlining on Saturday night. I had always missed them at previous Fests, but I have been converted. They brought an energy to their set I have never seen in an acoustic format. It was as if they were channeling early Nine Inch Nails or Anthrax for their energy, with a banjo and a cello. It didn’t come across as hokey or forced; they just loved playing on the massive stage, where they more than earned their place. The Avett Brothers are the new face of the Newport Folk Fest. Closing with “I and Love and You,” they left jaded critics as satisfied as their full fledged fans.

My review of Sunday’s marathon of music is forthcoming. In the meantime, head over to NPR for video and streaming audio of the majority of the performances from all three days. 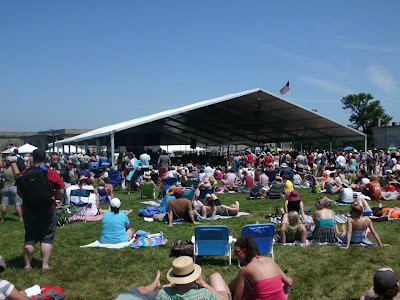