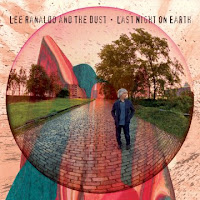 As if this fall wasn't already packed with anticipated releases, it looks like Lee Ranaldo has a new album coming out October 8 (a month after Kim Gordon's Body/Heat) on Matador. Last Night on Earth is his first band with The Dust, which features Steve Shelley on drums. From the first track to come out (also the first song on the album, this could an extension of last year's Between the Tides and the Times. It starts off sounding like Sonic Youth relaxing into middle age, and then just as "Lecce, Leaving" sounds like it's winding down, it veers off into interesting territory, with hints of country twang mixed into the wall of noise. As much as I did like it, Between the Tides and the Times disappointed me a bit with it's middle of the road leanings. Last Night on Earth has increased my anticipation.

You can pre-order Last Night on Earth over at Matador's website. Check out "Lecce, Leaving" below, as well as some upcoming tour dates for Lee Ranaldo and the Dust, including some with Built to Spill.