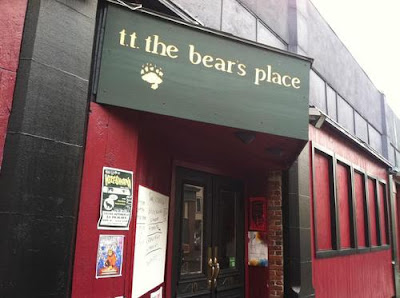 A couple weeks ago, Ken said goodbye to TT the Bears, the Cambridge rock club. While I don't make it to many shows these days, TT's has been my overwhelming favorite venue to see live music since I started going to live shows 15 years ago. I have a ton of great memories at TT's, and I figured a good tribute would be via a Monday Mix, especially since we haven't had one in a while.


* Snow Patrol - "Starfighter Pilot": I have been a fan of Snow Patrol since their Songs for Polarbears days, and their third album (the one with "Run") is where things really took off for them stateside. One of their first shows in their first major label tour brought them to TT's, which was maybe half-full and, if I remember correctly, didn't even have the band headlining. Within four years, I was watching Snow Patrol headline the Agannis Arena and they barely sounded like the band I fell in love with, but this show remains one of my all-time favorites at TT's. "Starfighter Pilot," by the way, remains one of my favorite songs, and I sort of annoyed Gary Lightbody by requesting this at every show before he broke down and played it. No regrets.

* The Reputation - "The Stars of Amateur Hour": An all-time favorite band of mine, they normally played The Middle East but they somehow got booked at TT's for one of their treks through the Northeast. It was one of their better performances, in my opinion, and was on a bill with Adam Green of The Moldy Peaches and Aaron Perrino of The Sheila Divine to round out one of the stranger bills in memory. The Reputation were always a good time, I struck up a friendship with a couple members that persists through this day, and that it was nearly 10 years ago since they broke up also breaks my brain a bit.

* Of Montreal - "My British Tour Diary": I have lost count as to how many times I saw Of Montreal at TT the Bears. The first time, Kevin Barnes's brother dressed up in an all-black bodysuit and acted like Kevin's brother. Another time, there were maybe 50 people there and much of the crowd just sat on the floor. When The Sunlandic Twins hit, however, everything kind of blew up. A sold out show was a real raucous time, and I don't think they've been able to play small venues since. I never anticipated the band being able to make it even a little big, so kudos to them.

* Turin Brakes - "The Underdog": I was supposed to see Turin Brakes when The Optimist LP came out, but then 11 September happened and the entire tour got cancelled. It wasn't until Jackinabox came out on a major label in the States that we finally got a wide-ranging tour, and it was a truly great evening on a whole. At this point, the band was right on top of their game, and they mixed a lot of old and new along the way. Kind of perfect even though things didn't take off for them in the United States the way I had hoped.

* West Indian Girl - "What Are You Afraid Of?": Opening for Turin Brakes was West Indian Girl, a kind of weird hippie dreampop band. I was really into their set, and, as my friend and I were leaving, two of the band members rushed out and gave me a copy of their CD, which was really cool. This sort of interaction was standard at TT's shows, but what makes this one especially interesting is that one of the former singers, Mariqueen Maandig, married Trent Reznor a few years ago and is a vocalist in How to Destroy Angels.

* Scissor Sisters - "Comfortably Numb": Another one of those bands that did a small tour before making it completely huge, I saw them right as "Take Your Mother" was hitting its stride. It was a sweaty, glittery debacle, but still a ton of fun.

* The Moldy Peaches - "Who's Got the Crack?": The Moldy Peaches really had an 18 month window where things were crazy, and then they went their separate ways save for that moment when everyone was into Juno. I first saw the Peaches open for The Strokes at Axis, but they did a tour/appearance with (I believe) Brendan Benson. The place was packed, and it was a weird show, but this was right on the cusp of things. I later saw them headline the Paradise and that was the last of it. At this point, I'm not sure we would see a reunion or if it would even work if they did.

* Freezepop - "Shark Attack": Freezepop is a Boston-based band probably known more in nerd circles for their early adoption of videogame-inspired instrumentation and their appearances in Guitar Hero and Rock Band (of which one of the founding members is a lead designer at the studio responsible for the games). I saw Freezepop countless times, but seeing them open for Sneaker Pimps (even if it was a reunited Sneaker Pimps that was a shell of their former selves) was probably more memorable than most if only because of the crowd there and how popular they had gotten to that point.

* St. Thomas - "The Cool Song": St. Thomas was the name of a Nordic singer-songwriter who wrote some pretty interesting indie folk songs, "The Cool Song" in particular being a massive hit with the crowd (and featuring members of Of Montreal playing with them on stage). I remember all of us who went falling in love with this guy, and we learned a few years later that the lead singer had committed suicide, which was really sad news to hear.

* Mclusky - "There Ain't No Fool in Ferguson": Mclusky broke up fairly quickly, all things considered, but I did get to see them on their final tour before it all fell apart. Still the only time I saw a mosh pit at TT's, and the reformed Future of the Left came through later, but I remember somehow getting tickets for this and racing from the airport following a trip to Chicago to see them in a tired, exhausted state. How weird.

* The Billy Nayer Show - "Baby": This is a weird song (and the only one on Spotify for this band), but so goes The Billy Nayer Show in a nutshell. I also saw them open for Of Montreal (sensing a trend yet?), and they just blew my mind. More an art performance than a musical group, I suppose they're not doing much as a group anymore, but the lead singer puts out music and movies now, so that's worth keeping up with.

* Jay Bennett - "The Palace at 4am": I saw Jay Bennett with Edward Burch shortly following a massive blizzard here in the Northeast. This was also noteworthy as it was the evening of the massive Michael Jackson interview on one of the major networks, and, because of the snow, things were pretty sparsely attended and I spent about an hour talking about music, Michael Jackson, and god knows what else with Bennett and Burch at the bar. Bennett was just coming off of Wilco, and I was trying my best not to be star struck. Bennett would pass away in 2009, and we're really worse off because of it.

* Kathleen Edwards - "12 Bellevue": This show actually got rescheduled due to the same snowstorm that hit around when Jay Bennett came about. It was rescheduled as a 6:00pm show and then got sponsorship from a local radio station. Kathleen Edwards remains one of my favorite singer-songwriters of all time, and she currently runs and owns a coffee shop in Canada. I hope she performs again.

* The Pine Hill Haints - "Never Gonna Die": Ken and I were actually at this show together, seeing Those Darlins and this band with Deer Tick as a special guest act. I really enjoyed this group, they're a pretty different, dark rootsy band, but the bigger takeaway for the night...well, we'll come back to that.

* Huck - "Never Needed You": I was fairly adjacent to the Worcester Music scene for a while. I had considered actually starting a band, joining a band, spending many a Friday at the Lucky Dog seeing Huck or The Deadites or, at the time, Mossberg, do their thing. Huck did an album release show at TT's once, all the Worcester bands went out that way to play, and it was a fairly fun night on a whole. Lead singer and songwriter Scott Ricciuti passed away a few years ago in a car accident, and the Worcester scene truly hasn't been the same since, but when I think of Worcester and of Huck, this is one of the shows I remember the most.

* Dolly Varden - "Second Chance": Dolly Varden was the Bennett/Burch opener, and I've been into them ever since. I've always wanted to see them again and I've missed them both times they've come through, but this might be one of the first bands that had a country influence that really piqued my interest in the genre.

* The Shins - "Know Your Onion!": Another "I saw them when" moment was their first tour following the release of Oh, Inverted World. Jokes about a song hitting a McDonald's commercial and possibly the most jam-packed I've ever seen anything at TT's, they were honestly a more compelling band when they hit the bigger clubs later in their existence.

* Those Darlins - "The Whole Damn Thing": I mentioned the show above, and Those Darlins were sassy and drunk and fun, and there's something to be said for shows like that. This show also featured inappropriate nudity from Deer Tick, so there's that.

* The Two Man Gentlemen Band - "Into My Minivan": The final show I've seen (and, judging by the calendar, will ever see in the current incarnation) at TT's was The Two Man Gentlemen Band with Ken some years back. The first time I'd seen them in a traditional rock venue, the band remains one of my favorites and is now partially involved in the music for Wander Over Yonder.
Posted by Jeff Raymond at 7:30 AM