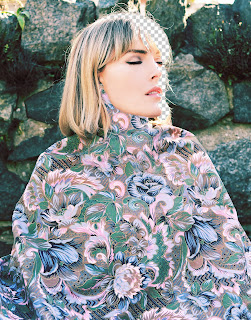 Gwenno, aka Gwenno Saunders, used to be in The Pipettes from 2005-2010. Knowing The Pipettes, her solo work seems to come out of nowhere. While her previous band was a fun throwback to 60s girl groups (Gwenno sang lead on the hit "Pull Shapes"), Y DYDD OLAF (The Last Day) is a political concept album that was inspired by a 1976 Welsh sci-fi novel of the same name. The album's first single, "Patriarchaeth," is kraut-pop. It's still a throwback sound slightly updated, but more 80s than 60s this time around.

Y DYDD OLAF (The Last Day) is due out July 24 on Heavenly Recordings. For more information on Gwenno, check out her Facebook, Twitter, and website. Listen to "Patriarchaeth" below, and find her current tour dates below that.