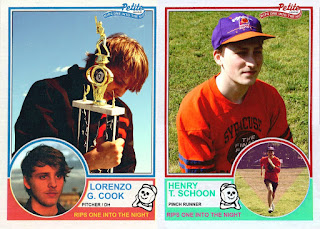 Petite League now reside in Ridgewood, Queens, but started out in the DIY show scene in Syracuse. Lorenzo Gillis Cook started out playing solo under the name Spark Alaska, once he met drummer Henry Schoonmaker, Petite League were formed.

Petite League's latest single, "Sun Dogs," might be the jangliest pop song you ever hear. The opening guitar riff is reminiscent of early Strokes, but in a much more lo-fi way. It somehow sounds like the most polished and produced basement recording of all time. It's all gritty and lush, with one of the greatest uses of "la la la" in a chorus I've heard in years. It's the NYC ooze of The Strokes mixed with the sunshine pop of The Beach Boys, which is one of those combinations you never new how badly you needed it until you hear it for the first time.

You can listen to "Sun Dogs" below. Petite League's third album, Rips One Into the Night (the last two were called Slugger and No Hitter), will be out September 1 on The Native Sound. For more on the band, check out their Bandcamp and Facebook.