Partner - "Fear That Closes the Heart" 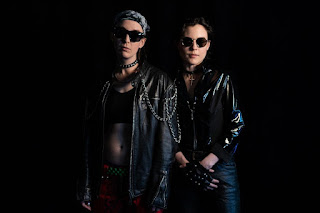 "Canadian LGBTQ Post Classic Rock" duo Partner seem to be on a mission to dabble in literally every musical genre. They've done indie rock, alt-rock, prog rock, country, etc., and on their latest single, "Fear That Closes the Heart," they're trying out 80's pop rock. No surprise here but Partner absolutely nail it. This literally sounds like a song that's been revived by Stranger Things, or at least that song you used to hear on the radio at your local pizza place and completely forgot about until just now. Of course, since this is Partner even if you despise 80's pop rock you're going to love "Fear That Closes the Heart" because that's just the power this pair have.

Partner says of their new song and video:

"This was the very first song we wrote during our sessions on Gabriola Island. The song is about fear, and how the sensation of fear can prevent someone from feeling like they’re living in the moment. We drew influence from Heart and 80s pop rock. The summer after we wrote this song, we went to the Folk on the Rocks music festival in Yellowknife, and participated in a collaborative project called 'Emerging Wildly' with Celeigh Cardinal and Cartel Madras. When Cartel Madras showed us their videos we immediately knew we wanted to work with them. We were blown away by the cinematography and their vision. We are so happy to present this video that they absolutely knocked out of the park."

You can watch the video for "Fear That Closes the Heart" below. Time is a Car is due out October 7 on You've Changed Records. For more on Partner, check out the band's website.