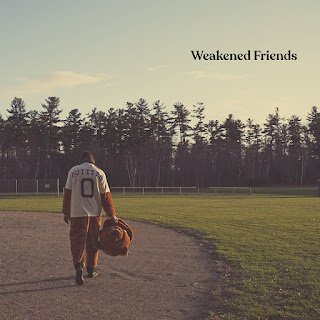 I'm always hesitant to put an album in my top 10 that came out in the past month. The new album excitement is still there, and a lot of times an album that I've gushed about doesn't seem as great after six months or so of listens. But... this is Weakened Friends here, so I'm more than a little confident that Quitter will still be a favorite album in a few years.

I was a little nervous about this album. If you follow the band on social media, you would have seen them repeatedly posting about how much they were convinced everyone would hate this album. They were wrong. Quitter is far from an exact copy of 2018's Common Blah, but it's close enough that this new one won't lose them any fans. Quitter sees them edging a little more into pop territory and showing off their Avril Lavigne roots a bit, but this is still an indie rock album. It's filled with killer anthems and catchy hooks throughout. If Quitter isn't the album that has Weakened Friends headlining the biggest club in your town by this time next year, there is truly no justice in the world.

Songs of note: "Quitter," "Everything is Better," "Tunnels," and "What You Like"