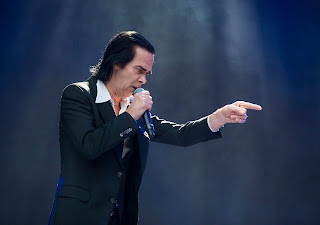 I wasn't a Nick Cave fan three months ago, but I am now.

Nick Cave is an Australian rock musician who is probably more than just a cult hero but definitely not a mainstream act, either. His baritone is unlike most male singers, his songs routinely pass the five minute mark, and the lyrics are filled with some of the most vivid and compelling narratives I've heard in a long, long time. I don't know why it didn't click the first few times I tried to listen, but it did now.

So for Monday Mix this week, have some Nick Cave. The bulk of the mix is based around his work with his band, The Bad Seeds, but also includes some offerings from the Grinderman side project and The Birthday Party (the post-punk, ahead-of-its-time band that preceded the Bad Seeds). Trimming a playlist down to the best 30 songs of all eras was a challenge, which means there's none of his soundtrack work with Warren Ellis and none of The Boys Next Door, but if you're anything like me, you'll listen to this mix and proceed down quite the rabbit hole.

Some fair warning: it might take a minute. Nick Cave's approach is singular, and for every song like "The Ship Song," there are efforts like "Saint Huck" that might be a little less penetrable. But there's a chamber-esque aspect to a lot of Cave's work, and a Tom Waitsian style to its overall presentation, and that's definitely worth something.

So enjoy what might be your new favorite obsession if you weren't already on board. And if you were already a friend, thanks for letting me become a latecomer to the (Birthday) party.