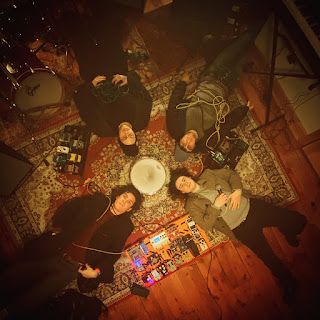 Normally I might balk at a song called "Murder Hornets" as it's an already dated title, but when the band is named Grampfather I have to at least give it a shot, right? "Murder Hornets" starts off as a relatively mellow psychedelic slice of hard rock. It's heavy in a more mainstream version of The Stooges' freak out tracks. And then the song just takes off with almost no warning. It's turns into this thrash meets psychedelic sound with some blues thrown in. It's a little bit of a mess and kinda sloppy at times, but that is not a bad thing in this case at all. "Murder Hornets" is one of the most unexpectedly exciting songs I've heard in a while.

"I wrote 'Murder Hornets' as a follow-up to our 2020 album 'Magnum Grampus,' our thrash album. What with the pandemic and all the blaring social injustices that came to define 2020, the news of incoming murder hornets just seemed like such a cartoonish cherry on top of all the misery and dread. Although the album starts off where 'Magnum Grampus' ends, the new album, 'Gramppappies' does get more hopeful as it progresses."

You can listen to "Murder Hornets" below. Gramppappies is due out February 25 and can be pre-ordered via Bandcamp. For more on Grampfather, check out the band's website.