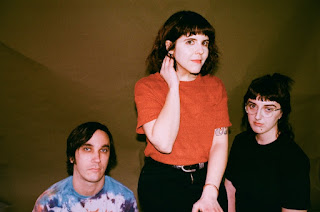 At one point it seemed like we were bringing you new music from Minneapolis every other day, but it's been a while since a Minneapolis band came to our attention. Maybe they were just saving up to bring us Scrunchies. Scrunchies are a Twin Citied supergroup that was founded by Laura Larson of Kitten Forever (one of my personal favorites!) and Danielle Cusack of Bruise Violet. The two met from appreciation of each other's bands and through playing together in a Buzzcocks cover band called Buzzcunts, which also featured Clara Sayler of Babes in Toyland. In 2019 bassist Matt Catore of Condominiums joined to flesh out their current line up.

The band's new single, "No Home Planet," perfectly nails a punk sweet spot for me. It's fast and loud and brash, but also has this unmistakable catchiness to it. It's rare to find punk this heavy that's still fun, but Scrunchies pull it off expertly. There's also the fuzz of early Seattle grunge. (I've oddly been on a huge Green River and Tad kick lately, so finding Scrunchies right now is basically fate.)

You can watch the video for "No Home Planet" below. Feral Coast is due out April 1 on Dirtnap Records and State Champion Records for cassette. For more on Scrunchies, check out the band's Facebook and Twitter.