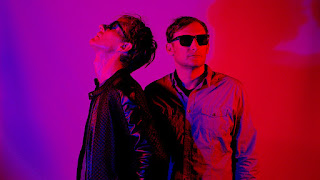 Boston based electronic duo Ex-Hyena are not a party band. Their latest single, "Capture the Stills," is not something you're going to put on to get the dance floor filled. The song is dark and moody. It's more like a melancholy and disjointed version of trip hop. It may not inspire you to dance, but it will grab your attention and make you want to listen. There is a lot to unpack in this song. Instrumentation seems to wander in and out, almost as if its lost and trying to figure out where it belongs within the song. And, as you're listening, you'll start to notice a groove in the song that is going to make you want to move, even if it's just a little.

“‘Capture the Stills’ is dark and menacing. Bo [Barringer] wrote the lyrics to this one… It certainly fits the vibe, and themes that Ex-Hyena often covers. To me, it's like falling into a David Lynch movie void, and witnessing two characters in a volatile relationship, or something like that. This was the last song written for the second LP, and I'm glad it made it on the album.”

You can listen to "Capture the Stills" below. Moon Reflections is due out later this year via Hush Club Ltd. For more on Ex-Hyena, check out the artist's Facebook and Instagram.