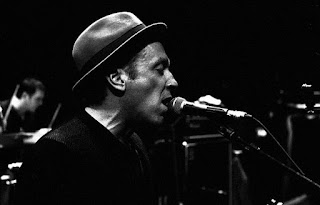 Back in the pre-digital days consumers would be screwed regularly by B-sides and rarities. I spent a lot of money on import CD singles just to get that one rarity song that wasn't on the album. And, of course, eventually it would just be released on a rarities compilation. But... I still had to have it first.

That's one thing I love about the modern music industry. A B-side or rarity can just be uploaded on the internet, quite often by the artist themselves. You can even get an artist going way out of their standard musical fare with an experimental song without having to spend $20 to hear it. Over the weekend, Bill Janovitz released "SKUNK" on Bandcamp. We all know Buffalo Tom's 90's alt-rock classics and should be familiar with Janovitz's more singer/songwriter solo work, but "SKUNK" is nothing like anything we've heard from him before. It's a just shy of two minutes funky as hell psychedelic instrumental jam song. You would swear this is from the 70's. Plus, it has a blistering guitar solo that you don't normally get to see Janovitz pull off. Would this song be worth $20 as an import CD single B-side? Maybe not. But a $1 Bandcamp download? Hell yes.

You can listen to "SKUNK" below. The song is available now for download via Bandcamp. For more on Bill Janovitz, check out his website.