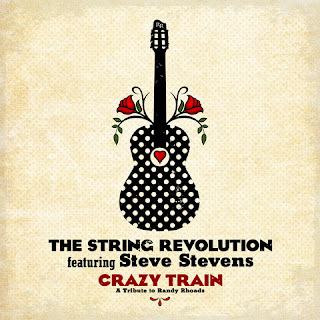 As a tribute to the late Randy Rhodes, Los Angeles based The String Revolution have joined with Steve Stevens on a flamenco-tinged cover of Ozzy Osbourne's immortal "Crazy Train." The cover is four guitar virtuosos doing an all guitar cover of one of the most iconic guitar rock songs of all time. Even Ozzy's vocals are even done with a guitar. The song works shockingly well as a classical guitar anthem, particularly with the flamenco vibe. The song has some personal meaning, as well. Janet Robin of The String Revolution was Randy Rhodes' only female student when she was nine years old.

Steve Stevens talks about the choice to cover "Crazy Train":

"When I was told that Randy Rhoads was to be inducted into the Rock And Roll Hall Of Fame I was thrilled. Long overdue but so deserving. As I was contacted to contribute to a reimagining of Ozzy’s Crazy Train…in my mind, I had one requirement, that it not be in any way similar to the iconic original version. Upon hearing the track two things struck me immediately, it works so well as a Spanish guitar piece, and that Randy would have loved it. It’s widely known that Randy was a beautiful classical guitarist, even continuing lessons through his Ozzy days. I hope we did you, proud buddy."