Jake Blount - "The Man Was Burning" 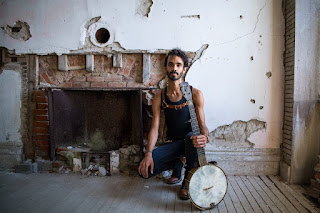 When I saw Jake Blount over the weekend, he played a bluegrass version of "The Man Was Burning," which he discovered in the Smithsonian Folkways archives. The song was sung by Joe Lee, a black prisoner in Virginia, in 1936. Blount promised he was releasing a rock and roll version of the single this week, and it is now out! "The Man Was Burning" isn't a pure rock and roll song, but it's the most rock and roll thing I've heard from Blount so far. There's a little to much jazz in the song to be purely rock and roll, but the song also combines elements of soul and blues which is pretty damn rock. This is an amazing reworking of a traditional spiritual (you can hear the original here), and the fact that I've heard versions in two completely different genres both by Jake Blount this week just showcases Blount's immense talents!

In a press release Jake Blount says of his new single:

“It’s a spiritual that echoes with burning hellfire. All of these supernatural, plagues of Egypt-type things are happening to this person ostensibly as punishment for his gambling. I don’t really mind people gambling, so I changed the verses to be about somebody who’s hoarding money and thinking too much of what it can do for him and is punished. This is kind of my 'Eat the Rich' moment."

You can listen to Jake Blount's rock and roll version of "The Man Was Burning" below. The song is available as a single via Free Dirt Records. For more on Jake Blount, check out the artist's website.