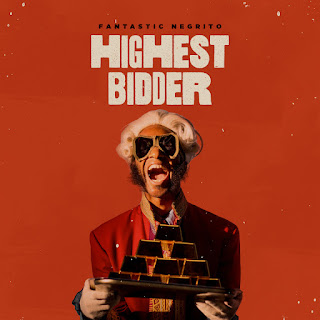 Fantastic Negrito is just one of those artists that's doing something that feels very familiar but also completely unique and refreshing at the same time. No one is quite doing the whole blues/roots thing quite like he is, and his new single goes even further into his own sound. "Highest Bidder" is still a roots and blues song, no question about that. But it's an amped up version of blues with a ton of funk and soul thrown in, enough to almost overtake the blues base. Fantastic Negrito has this fabulous power to turn the most important social issues into a party song, and "Highest Bidder" does just that.

“At the time, I was listening to a lot of African drum patterns, and that definitely influenced this song. I was trying to create the feeling of Africa but filtered through America. I think Taj Mahal talked about the idea of the 'gods of Africa meeting the ghosts of Mississippi,' and that’s what I was trying to embody with this song.”

You can watch the video for "Highest Bidder" below. White Jesus Black Problems is due out June 3 and can be pre-ordered/pre-saved here. For more on Fantastic Negrito, check out the artist's website.