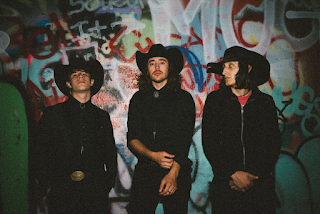 Los Saints are a trio out of Chula Vista, CA comprised of first generation Mexican-Americans. Their new single, "Fouund You Somewhere," combines the flashy garage rock of The Strokes with the melancholy jangle pop of The Smiths. It's an arena rock ready low key anthem about heartbreak that you can still groove to. It's danceable while still being a rock song. If anything, it's fun mopey, which describes some of my favorite music of all time. "Fouund You Somewhere" is the kind of song that could very easily crossover to the level of mainstream that would get them on network TV, so let's enjoy them as our little secret while we still can.

“‘Fouund You Somewhere’ was written at the end of my first serious relationship. It’s about yearning for something that you lost and holding on to what could have been, if things were done differently.”

You can watch the video for "Fouund You Somewhere" below. The song is currently available as a single via Enci Records. For more on Los Saints, check them out on Twitter and Instagram.