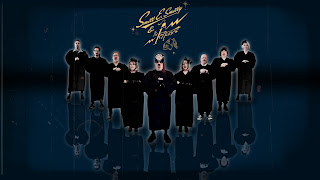 Boston's Smitt E. Smitty & The Feztones make weirdo rock and roll. The band's latest single, "Buzzkill Baby," falls on the heavier side of rock without being metal, punk, or even hard rock. It's a bombastic cut with more of a choir than gang vocals, and more than its fair share of groove. It combines the proto-punk of Smitty's hometown of Detroit with the anything goes rock and humor of Frank Zappa and the lighthearted vibes of They Might Be Giants. It's a weird song that is still firmly rooted in rock without being a true novelty song. It's a special kind of skill to go this deep into the world of fun or weird without getting zany, and Smitt E. Smitty & The Feztones deftly pull this off.

“There are endless numbers of ‘buzzkills’ we all suffer through everyday, but if I had to pick one, it would be people who are obsessed with being ‘right’ all the time. In the grand scheme of things, being ‘right’ counts for very little. If being ‘right’ means pushing people away, and being generally disagreeable and unpleasant to be around, what have you gained? Nothing. Let it go. There are bigger and more beautiful things in this world.”

You can watch the video for "Buzzkill Baby" below. Smitt E. Smitty & The Feztones will release their debut album later this year. For more on the band, check out their website.