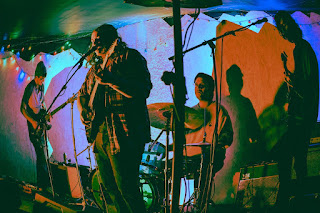 Kingston, NY's Grampfather still have one of my favorite band names I've heard in a while. The band's newest single, "Poppies," is a psychedelic jam rooted in other genres like post punk and jangle pop. Any song called "Poppies" has to have a little psychedelia in it, but Grampfather keep this from sounding too jammy. It has this hypnotic vibe along with jangly guitars and some of the dark feel of post punk. This is a catchy and fun song mixing genres you'd think shouldn't be mixed but these four guys pull it off wonderfully.

"I wrote the main riff for this song a few years back, but I wasn't quite sure what to do with it until I connected it with the chord progression in the second half of the song. I liked the poppy vibe of it, so I just named the song file 'Poppy song,' which then became "Poppies, drawing a connection to the title of the album, Gramppappies. The first half of the song is kind of sarcastically thinking about life without music/art/beauty/flowers (poppies), and the second half genuinely expresses my passion and appreciation for music in my life and how barren this life would be without it."

You can listen to "Poppies" below. Gramppappies is due out February 25 and can be pre-ordered via Bandcamp. For more on Grampfather, check out the band's website.