Simon and The Astronauts featuring Rachel Haden - "I Have a Name" 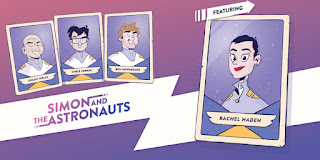 After gushing about the first single from Simon and The Astronauts and Rachel Haden, we're thrilled to bring you a second single. The cross-continental collaboration has released "I Have a Name." Somehow this new song hits more of a 90's sweet spot than "Ten League Boots" hit. If you have a certain fondness for mid-90's power pop (known then as "post grunge"), you're going to love this one. It's filled with crunching guitars and Haden's glorious vocals done with that distant space age kind of effect I didn't realize I missed this much. "I Have a Name" is a perfect 90's power pop anthem that was released thirty years too late.

Simon Wells of Simon and The Astronauts says of the new song:

"The song is for everyone; we all have a right to be heard but we all need to listen. For too long a few people make the decisions and expect the rest of the planet to follow. It's time for change. Be it Greta Thunberg and the climate, civil or religious unrest or the problems that have never been addressed and ignored."