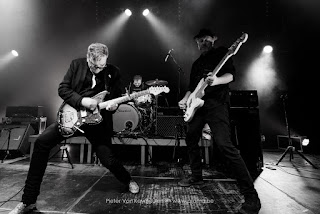 Aaron Perrino has been releasing a ridiculous amount of music during quarantine. The current (former?) Sheila Divine frontman was releasing a song a day for a while, usually as an homage to another artist. He was doing it so much, it was impossible for us to even know where to start bringing it to you. Now that he's slowed down, he's released a new Christmas song. I'm sure there are going to be a bunch of COVID-19 themed Christmas songs and merchandise this year, and I'm already sick of just thinking about it. But The Sheila Divine's "Corona Christmas" might be the only acceptable one. "Cornona Christmas" has one of the darkest senses of humor I've heard in decades. It's so dark that I'm not completely sure that it is meant to be taken as humorous. It's a bleak, bleak song, about a bleak, bleak topic.

In a Facebook post, Aaron Perrino explains the song: "It's almost time for Christmas music so I figured I'd write one for your holiday playlist. This holiday season is going to be like no other as Covid is spinning out of control. Let's hope the New Year brings this pandemic to an end. Until then wear a freaking mask & have yourself a Corona little Christmas."