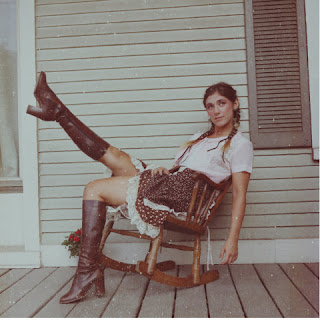 Before you listen to the two new songs from Nashville's Sierra Ferrell, you should probably sit down. Make sure you're not doing anything that requires too much of your focus, because you're going to need it for these songs. "Jeremiah" is country, but it's country not really like anything you've heard before. There's just the slightest hint of jazz, and maybe some groovy 60's vibe poking around in there. But, despite how unique it is, there is something familiar and mainstream about it.

And then you'll hear "Why'd Ya Do It.' As much mainstream as "Jeremiah" may have, "Why'd Ya Do It" is a strange song. It has some Eastern European influences, skirting into gypsy music territory. It's almost like Gogol Bordello were influenced more by country than punk. But, there is still some pretty serious mainstream appeal here. It could be because of Sierra Ferrell's voice. As odd and unique as her music may be, there is no way anyone with a voice like hers isn't going to appeal to everyone that hears it.

You can listen to "Jeremiah" and "Why'd Ya Do It" below. The two songs are available now, with a full length due on Rounder Records in 2021. For more on Sierra Ferrell, check out her website.

Email ThisBlogThis!Share to TwitterShare to FacebookShare to Pinterest
Labels: jeremiah, Ken Sears, sierra ferrell, why'd ya do it