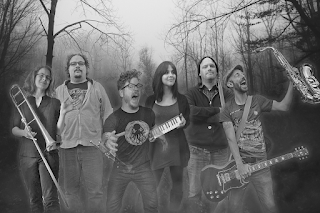 There's a meme that goes around every so often saying that ska is the sound that plays in a twelve year old's head when they get an extra mozzarella stick in their order. Goth is traditionally very mopey, sad music. You would never expect a band to combine those two sounds, so when we got an email for a band described as a "ska-goth collective," there is just no way we're not listening.

Grave Danger's latest song, "Specter Inspector," is definitely much more ska than goth. It has that upbeat, horn heavy sound associated with goth, but then again The Cure's "Why Can't I Be You?" exists, so... I'd call this more Halloween themed ska, although it does have an ever so slightly darker sound than ska typically does, so maybe this is just as goth as ska can get.

David Schwantes of Grave Danger says of the new song:

"I've always enjoyed "ska spy songs", in the tradition of Spy Market by Let's Go Bowling and Seventh Street Gangster by Dance Hall Crashers and I thought the phrase "specter inspector" was just funny. This song was a chance to lean into a driving bass line, a slinky horn part, and lots of organ and build a film noir style detective world full of ghosts and supernatural intrigue."

You can listen to "Specter Inspector" below. The song is currently available over at Bandcamp. For more on Grave Danger, check out the band's Facebook and Twitter.