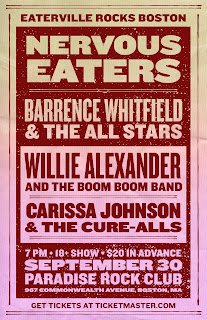 Thursday night saw Boston garage and punk legends coming together for an unforgettable night of music at The Paradise. Three of the four artists started their careers in the 1970's, with Carissa Johnson and The Cure-Alls being the only newbie to take the stage. It was a night of classic performances for a small but die hard crowd.

Carissa Johnson and The Cure-Alls took the stage first. They were the unknown band of the night (although there was a small cluster of fans obviously there for them) but quickly proved they belong. Johnson has become one of the prominent songwriters in Boston, specializing in rock based pop songs with a heavy hint of garage rock. It was her band's first live show in roughly two years and they came out swinging. They played a mix of songs from their forthcoming album and some older favorites. With her band, the songs have a much more rock edge to them than when Johnson is playing solo which fit the theme of the night perfectly. Carissa Johnson and The Cure-Alls may not have been the draw of the night, but their merch table able seemed to be busy after their set.

In an odd move, the evening's headliner played second. Nervous Eaters were one of the first punk and New Wave bands in Boston back in the 1970's. In another interesting move, the band started off playing new, unreleased songs. The band then played an older song before going back to new material. Usually bands that have been around for forty plus years tend to give the audience the older stuff they want with sprinklings of new material, but not with Nervous Eaters. As the set went on, they went further back and played the classic hits like "Loretta." It was almost like they were purposefully going back in time with their set list. Their newer songs were good, but they have more of a standard classic rock feel, while the favorites are much more garage rock and punk.

Speaking of punk, Willie Loco Alexander has been kicking around for fifty years now. He did some time in The Velvet Underground starting in 1971 before branching out into other musical projects. Performing as Willie Alexander and the Boom Boom Band, it was a sonic clusterfuck of a performance. At times (maybe even most of the time) it sounded like all four members of the band were playing different songs, but somehow it worked with the chaos of it all. Alexander was definitely the artist I knew the least of before the night, but once he busted out the immortal "At the Rat" for his second song, I knew I was in good hands for a classic punk show.

The already small crowd seemed to clear out before Barrence Whitfield & The All Stars took the stage, but it was truly their loss. Whitfield is a classic soul singer that has always had a bit of a punk edge to his music. Thursday night it was Barrence Whitfield & The All Stars as opposed to & The Savages. It seems that his All Stars are a bit more straightforward soul than The Savages, but you're not going to hear any complaints from me. They did the classic soul thing of the band playing one instrumental song before the singer comes out, and after some surf rock Whitfield came out and immediately broke into "Bloody Mary." The screams at the beginning were the perfect bridge from punk to soul, and Whitfield masterfully gave all the aging punks a lesson in edgy soul. I almost feel bad for the people that left, because they truly missed out.