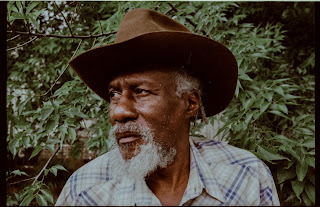 Considering Robert Finley spent part of September opening for The Black Keys in arenas, getting to see him in a tiny venue like The Porch Southern Fare & Juke Joint was a special treat. I'm always going to find any show in a venue that doubles as a restaurant to be a little strange, and this was definitely a unique show, but in some of the best possible ways.

I&R, the band led by Providence based musician Josh Cournoyer, have been doubling as Finley's backing band and opener on this run of dates, and they took the stage at 10:00 pm sharp. They started playing to literally no reaction from the crowd. That was strange, since I've never seen a band start playing to absolutely no applause, but there's a first time for everything I suppose. Since they were billed as the opening act, I assumed they were going to play a short set, take a break, and then return with Finley for the headliner set. After a minute or so of them playing, Finley was led to the stage to start the show.

And what a show it was. Although he's only been playing professionally for a short time, Finley took the stage like he's been playing in front of large audiences for decades. Live his voice is the perfect mixture of gruff and pleasant for his brand of soul. He sang stories about his life, sex, and religion, as any great soul singer is going to do. The crowd was a mixture of hipsters and people who wanted to see a TV star, and it's safe to say everyone was entertained. Finley apologized to the crowd for sitting on a stage for two songs (he blamed his boots for being tired for the second one), but I can't imagine anyone minded. The man is sixty-seven after all, so he can sit down anytime he needs to. He was as captivating a performer as anyone, whether he's belting out his songs or charmingly awkwardly dancing.

Despite basically being hired guns for the tour, I&R did an impeccable job backing Finley. They may have had guitar tabs written on notebooks and drum tablatures on Post It notes, but they played like they've been backing him for years. Josh Cournoyer is one hell of a guitar player, and he played with a passion worthy of a soul great. Plus, Chuck Berry had a new backing band for every show he played, so this fits right into the music's legacy.