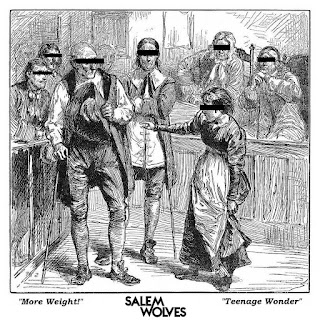 Giles Corey was convicted of being a witch during the Salem Witch Trials in 1692. While many victims were hung, Corey was subjected to pressing since he refused to enter a guilty or innocent plea. He was stripped naked, laid in a pit, and had heavy stones placed on boards on his chest. For two days the sheriff asked him to plead guilty or innocent to witchcraft. Corey replied with only two words each time: "More weight." More rocks were added each time, until Corey died after two days of this torture.

Leave it to Salem Wolves to immortalize Corey's last words in song. "More Weight!" is a groovey hard rocker that reminds me of Death From Above 1979 as a garage rock band. It's fast and heavy like 60s hard rock. It's a fitting tribute to America's first rebellious badass.

If you're not too old to be able to drop everything and go to a show last minute, Salem Wolves are playing at TT the Bear's in Cambridge tonight (Tuesday). Also, TT's closes forever in 18 days, so get there and say goodbye while you can. If you can't make it tonight, they also play KOTO in Salem, MA Friday night. For more information on Salem Wolves, check out their Facebook and Bandcamp. Listen to "More Weight!" below.