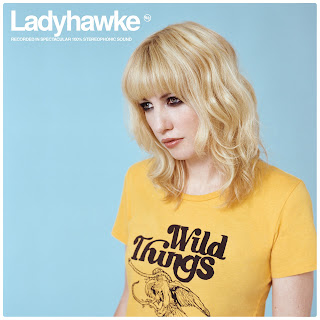 My top album of 2016 is Ladyhawke's Wild Things.

It's my favorite album this year. It's the album I listened to the most this year. There was a moment about a month after this came out where I posted on Facebook something along the lines of "All I do is listen to Ladyhawke now" because I was so addicted to this album. When I wasn't listening to Wild Things, I went back to her older albums and listened to those instead. When I put on my playlist of current obsessions, my wife asked me why I listen to Ladyhawke so much since her songs were probably taking up 10% of the playlist most of the summer. Literally as I write this, my Spotify end-of-year recap came in my email, and three songs from this album are my top three tracks. According to Spotify, I'm in the top 1% of Ladyhawke listeners, apparently.

Can you tell I love this album?

It's the perfect pop rock album, for sure. It's polished but still feels fresh, it's got melodies that stick in my head constantly, I find something new to love in it every single time. I can't say a single bad thing about it, and I realize that I haven't been to a live concert in four years and Ladyhawke is playing Boston in March and I may need to end my drought. I don't think I knew her before this year, and I'm glad I was able to find this album, because it's just been a great listen. If you haven't bothered yet, give it a shot now. It's not too late.