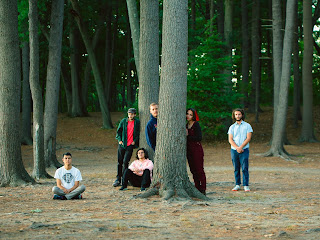 Birthday Ass is a weird band. Their latest single, "Plubbage Blubbage," really cranks up the weird. It's a freak jazz/punk burst of horns and just noise. It starts off almost normal, like maybe a slightly weird Lake Street Dive song. And then everything gloriously goes off the rails into a world of art rock and free jazz. And then just keeps going. This is one of the few songs that both art punks and more open minded hippies could actually agree on. What makes it even stranger is that around the middle the song seems to get (relatively) normal, like if a mainstream rock band decided to try to make a noise record but didn't have the guts to go all in. But, don't worry, the weirdo jazz comes back for a grand finale!

Priya Carlberg (front-woman, composer, arranger, lyricist, spokeswoman) explains the new song... or doesn't: “The meaning of the word plubbage is top secret so I can’t go there. This was the first song we had rehearsed for the album and I feel it encapsulates us well,” she continues, “a twist of big-band meets Phil Collins.”

You can listen to "Plubbage Blubbage" below. Head of the Household will be out April 23 on Ramp Local. The album can be pre-ordered here. For more on Birthday Ass, check out the band on Facebook and Twitter.