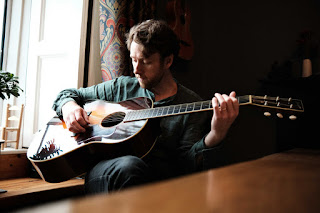 When you bring in Haley Heynderickx for a song, you're guaranteeing that I'm going to excitedly listen. Irish singer/songwriter Peter Doran has Heynderickx guesting on his latest single, "Blue Mountains." This new song is decidedly more mainstream folk than Heynderickx's own music, but "Blue Mountains" may be a perfect folk song. Doran and Heynderickx's voices blend perfectly together. It's such a chilled out, beautiful folk song that is impossible not to be sucked in by. It's the kind of song that's going to make you rediscover Heynderickx's catalog and dive straight into Doran's. There aren't many perfect songs out there, but "Blue Mountain" is one.

“Everyone carries about an idea of Paradise. A dream-perfect world in which to live out their days. Blue Mountains is the tale of a clean living, God fearing man whose only wish is to leave the world behind and set up home forever with his sweetheart deep in the Blue Mountains. Where are his Blue Mountains? Our love-struck protagonist has never been there, couldn't point them out on any map... but he's been there in a song. It's a story-book romance for him and it's just enough to keep him keeping on.

"When I was growing up, I had a musical mentor in an incredible local guitar player named Vinny Baker. He passed away suddenly in 2013 and a few years later his acoustic guitar came to me. Blue Mountains was the first song I wrote on that guitar. I believe it was waiting in the instrument. A gift from its former owner. I was joined by US Songwriter Haley Heynderickx on harmony vocals on this recording. We sang side by side, on the first day of recordings for my upcoming album Voices.”

You can listen to "Blue Mountain" below. Peter Doran's upcoming album, Voices, is due out May 7. For more on Peter Doran, check out the artist's website.