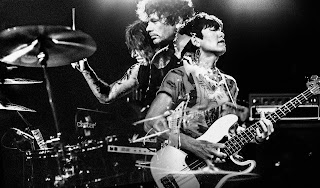 The latest single from Chicago's FACS is a mess. A giant, glorious, post-punk industrial mess. "General Public" is the kind of song most people aren't going to be able to handle. There is almost too much going on, so you're going to have to pay attention to it to fully grasp the song. FACS have piled layers upon layers upon layers at times. At other times, it's a relatively simple noise rock/post punk song. While it is grating at times (by design), the more you listen and the deeper you pay attention, the more beauty you start to find. Of course, that could just be Stockholm Syndrome kicking in. "General Public" won't be for anyone, or probably even most people. But if you love this kind of thing, this will quickly become a favorite of the year.

"The song is about roles, perceived and assumed, and how we translate that with each other. This song fell out complete, Andy Gill had recently died and we were channeling Gang Of Four "Solid Gold" era, where it feels like everyone is playing a different song together."

You can watch the video for "General Public" below. Present Tense is due May 21 on Trouble in Mind. For more on FACS, check them out on Facebook and Twitter.