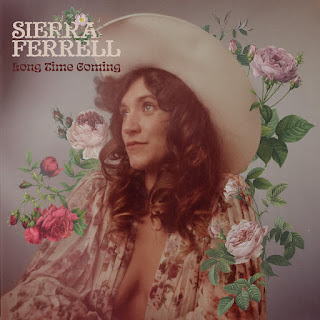 I'm not quite sure how it happened, but I stumbled onto Sierra Ferrell's song "Jeremiah" a little over a year ago. It was one of those times when you hear a song from a new artist and just drop everything to hear more. It's combination of classic country mixed with a little jazz and some 60's groovy cool absolutely sucked me in. Once she released covers of "Rockin' Around the Christmas Tree" and "Jingle Bell Rock" last year, I was completely smitten with Ferrell's music.

And then Long Time Coming was finally released. I had such an anticipation for this album that it should have been a disappointment, but it wasn't. I don't think any album this year is as fun as Long Time Coming is. The songs on this album mix together classic country, traditional folk, and jazz into one of the warmest and most familiar sounds I've heard in years. Plus, Ferrell is balancing between the worlds of serious folk musician and having a little throwback hokeyness masterfully. A song like "Bells of Every Chapel" has a birdsong in it like an early Disney animated movie, which should seem ridiculous, but in Ferrell's hands it's impossibly charming. This is the kind of album that can melt the heart of even the crustiest, cynical aging Gen-Xer.

Songs of note: "The Sea," "Jeremiah," "Bells of Every Chapel," "At the End of the Rainbow," "In Dreams," and "Whispering Waltz"