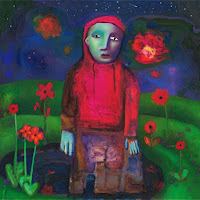 I shouldn't like girl in red as much as I do.

That's not entirely fair, but it's not entirely my fault, either - when you're an artist that is synonymous with teenage lesbianism, a middle-aged heterosexual male with a mortgage ain't the target demographic. And yet.

girl in red excels because it's very straightforward. It's definitely mainstream alt-rock in many ways, but there is an absolutely emo-style confessional perspective here that sets this album apart from most others. "You Stupid Bitch" is so direct, "Hornylovesickmess" so brutally honest, it's honestly hard not to be a little charmed even while you want to ask if she's doing okay. And yeah, "Serotonin" is amazing, but there is a ton of subtle parts to the lyrics that make it stand out.

If you've missed out on this one up to now for whatever reason, fire it up. Even if you don't love every song, I'm pretty certain you'll come out with a few new favorites for the year.

Songs of Note: "Serotonin," "You Stupid Bitch," "hornylovesickmess," "Did You Come?"

Email ThisBlogThis!Share to TwitterShare to FacebookShare to Pinterest
Labels: best of 2021, girl in red, Jeff Raymond, jeff's best of 2021