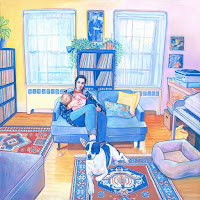 There are two acts that are responsible for this blog existing, and one of them is Laura Stevenson.

We've been fans since "Master of Art," we've loved so much of what she's put out, but I personally found The Big Freeze to be a sharp turn from the edgier roughness of a lot of her previous work. Not bad, just different. Laura Stevenson acts as a sort of reintroduction and feels like a musical reset button from an artist dealing with a lot all at once, thus making it perfect for these pandemic times.

Stevenson approaches this record as a new mother while also recovering from some caretaking duties, and her confessional style that carried over from The Big Freeze is one I can relate to in a lot of ways as a current parent and on the other side of a traumatic caretaking period of time as well. It's kind of cliche to say that such-and-such artist "gets me," but I feel like this album may as well be a conversation with a friend over a few beers as we commisserate over all the stuff that probably should have killed us a few times over.

When I was going through my list this year, I was surprised that this made it as far up as it did compared to other albums I spent more time with on a whole. This one, however, is probably just a little more personal to me, and I get a little emotional even writing about it. In the inherent subjectivity of "best of" lists after eighteen months of collecting reconsiderings of who we are and what we do, this album persists. It's beautiful, it's wonderful, it's essential, it's meaningful. And Laura, if you see this? I hope you're doing okay.