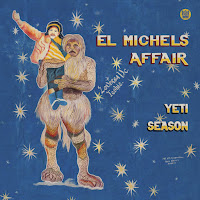 You know an album is good when it sets off a new musical obsession. Yeti Season did exactly that.

Leon Michels, lead songwriter and producer of El Michels Affair, had prior stints with Sharon Jones and the Dap Kings and members of Wu-Tang, and now produces and backs other acts along with new material. This third album of originals feels like it should soundtrack a movie in the 1970s that hasn't aged as well as you remember, and is just as reliant on its specific and intentional production choices as it is on the actual quality of the songs.

I don't know how I found them, but El Michels Affair led me to Altun Gun, to TEKE::TEKE, to a whole world of retro/psych music I didn't know existed. Yeti Season is the best of the bunch, but I appreciate this for turning me onto such great music just as much as I appreciate it for the musical revelation it is.