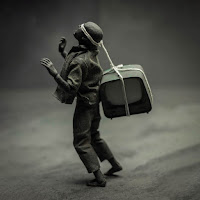 On one hand, th1rt3en is not your typical rap act, and not just because of the instrumentation and rock trappings. There's a different feel to this, a different... something that kept drawing me back again and again.

On the other, this is a relevatory rap album in many regards. Yeah, it's not Run DMC and Aerosmith, it's not Jay-Z and Linkin Park, although it arguably borrows at least partially from those collaborations. But this is more Public Enemy and Rage Against the Machine without all the baggage while holding onto all the anger. No matter your political positioning, "Cult 45" hits hard, "Scarecrow" acts as a slice of horrorcore in the middle of the record, and the back portion of the record has "Kill 'Em All Again," an anthemic-style track with messages for days.

I was shocked at how much I liked this record when I first heard it, and I was also surprised at how much I still love it nearly a year after its release. Easily the rap album of the year for me, no contest.