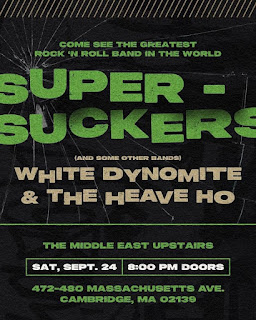 In the past four years, I've seen the Supersuckers twice. Back in 2018 I saw them play in Worcester when they were celebrating their thirtieth anniversary by playing The Smoke of Hell and La Mano Cornuda in their entireties, and in 2019 I saw them in Hampton Beach, NH for the twentieth anniversary of The Evil Powers of Rock 'n' Roll. This year was the first time I saw them in Boston and for just a straight up show.

Seeing them at The Middle East was a completely different world. The previous two shows were modestly attended at best, but Saturday night's show was packed if it wasn't sold out. This definitely wasn't a hipster crowd, either. This was a show for fans of rock 'n' roll even if it's not stylish.

Supersuckers didn't play fancy music. They played the fan favorites like "Born with a Tail," "Pretty Fucked Up," and "Creepy Jackalope Eye" in their rock 'n' roll set. Looking back it's surprising that such a straight up rock band were ever in the Buzz Bin or signed to Sub Pop. They've been making timeless rock music for thirty years, and it's nearly impossible to guess what year each song came out. I think I'll stick to heading to The Middle East for their 2023 tour since it's more fun for everyone to sing along to rock 'n' roll songs with a packed, appreciative house.

Boston's White Dynomite opened the show. Taking the stage dressed all in white, the band announced that they were White Dynomite and their first song was called "White Dynomite" from the album White Dynomite. Since White Dynomite played no nonsense rock 'n' roll with just a hint of tongue in cheek, the crowd loved them. They played a style of rock that imagines if Motorhead leaned into punk a bit more while still having kick ass solos. It's hard to have a little bit of a tongue in cheek gimmick without going too far into parody, but White Dynomite pulled it off perfectly. They even leaned into the nostalgia aspect of the night when the singer told a story about getting the Supersuckers to play a song back in 1992 at the same venue by getting Eddie Spaghetti high. They were definitely the most fitting local support I've seen open for the Supersuckers.