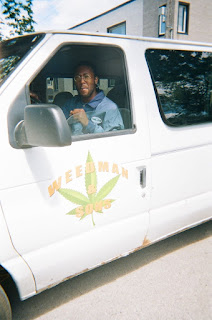 2021 seems to be the year of Canadian hip hop for us. Winnipeg's Dill the Giant is back with a new laid back hip hop single. "Morning Dew" has a vibe reminiscent of early 90's hip hop, but it sounds purely like 2021. If we're going to keep up the 90's hip hop comparisons, it lives somewhere between gangsta rap and the more mainstream positive or funny hip hop of that period. It has the edge of gangsta rap but the appeal of a more mainstream sound. If hip hop from Winnipeg could ever break through to the rest of the world, it's going to be Dill the Giant.

Dill the Giant says of the new song:

“This song is one of my favourite songs I've ever made so far. Steve had this nice beat, and I was able to get the vibe, and feel instantly. Hard to explain my headspace at the time of making this, but I love it.”

You can listen to "Morning Dew" below. Weed Man Son is due out August 13 on Birthday Cake. For more on Dill the Giant, check him out on Twitter and Instagram.