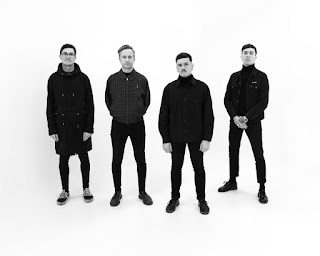 The latest single from French punks Nightwatchers is what happens when post punk goes pop punk. "White Fathers" is too discordant to be pop punk, but it's way too catchy to be truly post punk. Interestingly, pleasant vocals tend to be what defines pop punk, but here the vocals are catchy but definitely too strained to be truly poppy. It's the same thing with the music. There's a distinct edge that keeps "White Fathers" from being true pop, but it still has just enough pop here. Plus, there is some great background vocal "oooooooh!" work here.

Since this is Nightwatchers, there is a strong political message to the song. Julien Virgos explains the meaning of the song:

"Cardinal Charles Lavigerie, founding member of the White Fathers, played a central role in justifying French colonization in Africa in the name of the fight against "Muslim barbarism". This song is adapted from a speech he gave to the French army troops in the cathedral of Algiers (1867)."

You can listen to "White Fathers" below. Common Crusades is due out October 8. For more on Nightwatchers, check out the band on Facebook and Instagram.