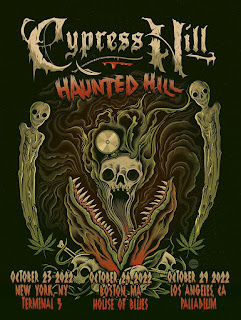 As soon as Cypress Hill announced the dates for this year's Haunted Hil shows, I knew I wanted to go. I had only seen Cypress Hill once way back in 2000 when they were touring with the Offspring. They were more of an opener, and it was when they were playing more as a rock band on the heels of "(Rock) Superstar," and I always had wanted to see their rap show more. And then they announced KRS-One as an opener, who I only saw once in 2004. This was at Worcester Polytechnic Institute, and it seemed to be half lecture and half performance. How could I resist two of my high school favorites playing together?

Ill Bill opened the show with his fellow La Coka Nostra member Slaine serving as hype man. They went on before the announced start time for a quick fifteen to twenty minute set to warm up the crowd. It's hard to review such a short set, but Ill Bill did exactly what he was there for. He got the attention of a crowd that was still milling about and got them hyped for the show.

Sick of It All played next, and were definitely out of my normal musical comfort zone. I'm not familiar with the New York Hardcore scene, and know them more by name than anything else. Of course, I love when shows mix up genres into one show, so it was quite welcome for me. They definitely had their fans in the crowd, but it seemed like a lot of those in attendance seemed more confused than anything. Singer Lou Koller explained the band's sound at one point, saying that it was a mix of punk, metal, and hip hop. They ended up fitting in surprisingly well by the end of their set.

KRS-One played a relatively quick thirty minute set that saw him blasting through his hits. He was joined by Boston's own Ed O.G., who got to perform his biggest hit "I Got to Have It." This was a set of, as KRS-One put it, "real hip hop" hits going back to his time in Boogie Down Productions into his solo material. He opened with a freestyle that functioned more as a soundcheck and into hits like "The Bridge is Over," "Step Into a World (Rapture's Delight)," "Love's Gonna Get'cha (Material Love)," and of course "Sound of da Police." He closed with another freestyle, this time over classical music. Someday I'll get to see the Blastmaster play a full set.

DJ Lord started off Cypress Hill's set with a quick DJ set mixing both rock and rap hits into one mix. This helped set the tone for the night when B-Real took the stage for a medley of their biggest weed related hits like "I Wanna Get High," "Dr. Greenthumb," and "Hits from the Bong." He was soon joined by Sen Dog, and Cypress Hill just played the classics from my youth. Every song seemed like the biggest hit of all time like "Hand on the Pump" and "Lick a Shot." They even played around with the classics a bit, with "Lick a Shot" incorporating samples of Public Enemy's "Welcome to the Terrordome" and House of Pain's "Jump Around." But the last four songs of the evening might have been the best four song end of set stretch I've ever seen. "How Could I Just Kill a Man" (which sampled Rage Against the Machine's cover for the end of the song), "(Rock) Superstar," "Insane in the Brain," and a cover of "Jump Around" closed out the night and drove the crowd into a frenzy. Interestingly enough, "(Rock) Superstar" got a fairly mellow reaction while "Insane in the Brain" got the biggest reaction of the night. For a night that celebrated the fusion of both rock and rap, maybe we've moved past the whole rock/rap thing and can just let music be music.