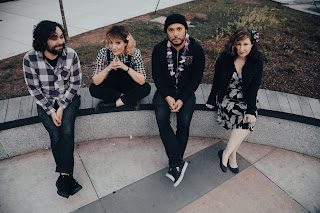 Boston's Radio Compass have a new single that sounds like Boston in the mid-90's, which is pretty much my musical sweet spot. "Stay High" is this wonderful slice of fuzzy power pop. It's almost impossibly upbeat and just filled with killer harmonies with a punk edge. Plus, the guitars just have that crunch you rarely hear this many years later. It's the kind of song that's going to just cram itself into your skull for many, many days, so be prepared for that. This is just a ridiculously fun song that is far more than just a press on my personal nostalgia button, and I just wish I had discovered Radio Compass earlier than now.

"Aloha is genre-bending and doesn’t follow the typical rules of how to record an album, what a band looks like or means, how I typically write for that matter. Without a doubt it’s a very personal album to me (and probably very relatable to many), an imperfectly perfect musical diary of the past couple of years."

You can watch the video for "Stay High" below. Aloha is available now via Sound Investment Records, and can be purchased through Bandcamp. For more on Radio Compass, check out the band's website.