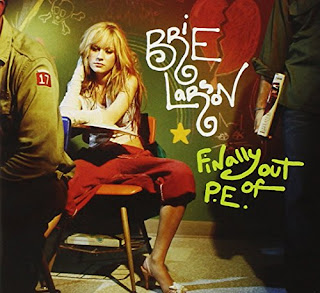 The release of Captain Marvel this week is perhaps the most anticipated movie release in the Marvel Cinematic Universe since the first half of Infinity War, with the added weight of much of what Black Panther brought to the table.

This post is not about any of that, but instead about lead actress Brie Larson’s attempt at pop stardom, Finally Out of P.E..

Released in 2005 when Larson was only 15 years old, this is not only a relic of a time that perhaps has not dated itself all that well, but an early piece of art from an acclaimed actress that has largely been forgotten to the sands of time. Reports are that the album only sold a few thousand copies overall, and when I tripped up on the album a month or so ago when I went back down a Holly Brook/Skylar Grey (credited as a co-writer on “Done With Like”) rabbit hole, I knew I had to give it a listen – at best, it was going to be an innocuous pop record, at worst the second-worst cringeworthy embarrassment of Larson’s career (behind Basmati Blues, her long-shelved and misguided Bollywood effort).

Either way, there are 13 tracks to get through here, so away we go:

“Life After You” - This is *so* early aughts pop it’s crazy. Reminiscent of “Everywhere” by Michelle Branch in a lot of ways, and this is clearly an attempt to set the tone very early on this album. Larson, who is a great actress in her own right, has a vocal tone here that feels a little constrained and subdued in many ways, which makes me wonder if that’s why this never quite took off.

“Whatever” – I’m struck by the interesting instrumentation here. This is the second song in a row with some fascinating synth action going on in the background. Larson’s still not as lively as I feel like the songs an instrumentation ask for here, but I honestly can’t tell if this is less Larson’s fault and more a production choice – with that said, I feel like there was more passion in some of the biggest pop hits of this album’s era. This is a much more interesting song than the leadoff track, though, especially with the more rapid-fire vocals in the chorus, and is one of the few songs not written by Larson in any way – in this case, a Swedish production team (I know, unbelievable, right?) helped put this one together, and the quality shows.

“Shoebox” – “I kept your picture in my shoebox.” Here’s the midtempo anthem of teen longing we’ve been waiting for, complete with the pleading “hey yous” in the chorus. I can’t fault her on this song, really, given her age when this was written and recorded, but one has to wonder if this would have been her version of Mandy Moore’s “Candy” had the trajectory of fame for Larson gone in the musical direction. Yeah, there’s nothing here for someone on the wrong side of 35 with this song, but it wasn’t ever for me to begin with, right?

“Falling Into History” – A bold choice in putting the ballad at track four in and of itself, but let’s just say it – this song is not great. Larson’s delivery is what it is, but the first three songs at least complemented what she could do at 15, and the songs were fine-to-good. This song, on the other hand, does not make a ton of sense to begin with (the title referring to someone fading into the past), and the instrumentation with the really rough bass work and the heavier guitars in the chorus delegated way, way, WAY into the background just makes sure this doesn’t work on many levels at all. Interesting side note here is that Avril Lavigne is credited as a co-writer on this track, especially given the comparisons to Lavigne in the few writeups about this album that exist.

“Done With Like” – This is probably my favorite song on the album so far, and not only because it somehow namechecks a Buick Mercury in the first verse. Honestly, if you had told me that Kay Hanley of Letters to Cleo wrote this song for Larson, I would have probably believed you. The lyrics aren’t anything special, but this has that classic pop rock feel and an anthemic chorus that just works overall. If the production of the album up to this point hasn’t worked for you, it’s unlikely this song will change your mind, but this is a legitimately solid tune.

“Loser in Me” – Back to the midtempo tune, but this song is kind of hilarious knowing where Larson ended up and how she’s blaming some of her faults on being the loner loser type. At the same time, though, we would probably recognize this song as an anthem about of someone suffering from some sort of depression. As much as I’d like to mock this song in some regards, I hope Larson’s doing better than she seemingly was for this song, but this also feels like a very high school way to handle this topic overall. Maybe I’m thinking about this song too much.

“Finally Out of P.E. ” – Title track with chugging distorted guitar and more synth weirdness. “I play guitar/but in your class that won’t get me far” is… something. She might win a Grammy, so she says (well, she came close to that Oscar…), but it won’t be for this song. I get the point here, but wow this song simply doesn’t work. The school bell going into the bridge where it drudges up the jocks versus musicians tropes in a song that’s basically about how no one gets her since she’s artsy and can’t do chin-ups? Okay Brie. I was the chorus/band/theater geek in high school, and even though we had a respected arts department and it wasn’t really like this in my experience, I get that others had a similar go of it to this song. But when the chorus never actually builds in tone or volume compared to the verses, this just doesn’t even feel worthy of the topic, never mind as the title track of an album.

“She Shall Remain Nameless” – This is probably the song with the fastest tempo so far, and it’s a pretty strident anthem about boy problems and about how other girls are after her guy? I don’t know, guys. I suppose it’s fun, but we just got out of a song where no one respects Larson for being artsy and not athletic, but apparently she’s also such a catch that her realness brings all the boys to the yard and no one’s gonna tell her otherwise? I’m not following the message here. Honestly, this isn’t a terrible song as long as you don’t think too much about it, but at some point you begin longing for some narrative consistency here.

“She Said” – From my limited sleuthing, this was the lead single (complete with shiny glossy music video). It seems deliberately bratty and standoffish in the verse before shifting to a more soaring, radio-friendly-style chorus. The guitar production is still frustrating here, as is the closing of the first line of each verse with the “la de da, la da dee” thing that feels a little forced. It’s very Radio Disney, and maybe that’s the angle they were going for on it? I don’t know.

“Invisible Girl” – “I don’t think you know my name/I’m the invisible girl,” she says. This is a song about trying to impress someone and get noticed, even though we established earlier that our singer is a loser who stays in and gets takeout instead of being social yet still has to fight the other girls off of her man. Structurally, this song has some interesting choices in terms of lengths of verses and such, but this felt like a total deep album track and it’s very much a throwaway. Kudos, though, to the “I’m not no J-Lo or Miss Spears/I’m just a girl who disappears” line.

“Go Goodbye” – Synth solos in between verses! Subdued guitars! Synth strings! This is definitely a paint-by-numbers midtempo breakup piece, and while it is similarly impressive to count the ways this song says farewell. I can actually imagine this song resonating with teen girls in crappy relationships had any teen girls actually gotten their hands on this when it came out, so credit to that, but we are officially in a rut on this album with no end in sight.

“Ugly” – This is the first time Larson’s vocals have really bothered me here, as she is scooping basically every line in the verses before getting to the point. This song is definitely the struggle-with-self-esteem anthem of the record in a way “Invisible Girl” and “Loser in Me” try to accomplish. Still, the most fascinating part of listening to this record is the dichotomy between “independent with a boyfriend and okay with what she’s good at” Brie Larson and “everything about me is terrible” Brie Larson. And it’s absolutely a very teenage way of handling life – god knows I still have those moments and that was 25 years ago for me – but it’s just very interesting to see it plotted out in a pop album this way. This is probably a sign that I am way overthinking a teen pop album, but you’ve read this far, so…

“Hope Has Wings” – Inspirational uptempo piece that feels like a requirement of every album like it in this era, and such a soaring song that it’s almost shocking that this ended up being the closing track. Some nice vocal choices here, and probably one of the better songs on the album (and the best in some time), although it’s hardly anything that is going to stick with me beyond this listen, too. You’ve heard this song one hundred times on pop radio, and Larson does a commendable job with it.

Overall? It’s hard to say what may have happened with Larson had this taken off, but it is, frankly, hard to believe that she would have taken off with this album as it is, even with the top-line production/songwriting help she got for many of these songs. To treat it as generously as possible, this feels more like a demo album that could have been rerecorded and repackaged in some form and turned into something more memorable. Then again, if that happens, do we get Brie Larson as we know her today? It’s definitely hard for me to imagine Short Term 12 ever happening for her if she ends up on the Avril Lavigne circuit.

The album is available on Spotify if you’re curious; I’ve embedded it below. Also, have a video from an AOL session she has on YouTube (from her official Vevo?!):


The live version kind of fixes the production issues of this song, personally. As for me, I have tickets for Captain Marvel on Sunday, and I’m just hoping I don’t picture “Loser in Me” Larson during any of the pivotal moments and ruin the experience.