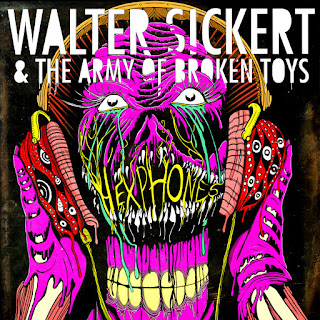 One of the great joys March brings are RPM Challenge albums, specifically the annual one released by Walter Sickert & The Army of Broken Toys. This year brings us Hexphones. Based on a Facebook post, this is a love letter to Sickert's teenage infleunces. Here is what they had to say about it:

"HEXPHONES is my ether-trip-glitched-out-memory of being a kid listening to my headphones on the long dark bus ride to school. I was the first kid on the bus in the morning. I’d wait on the side of a highway at 6am shrouded in the cloak of music created by my headphones. The long ride would be filled with music pumped directly into my DNA; a portal to safe place inside my head.
Chaos at home and hassled at school; that long drive was freedom from everyone that saw me as something that needed to be controlled, or fixed, or disciplined for being different.


Those moments of peace and inspiration were some of the earliest sparks that set my life on fire for art.
HEXPHONES is a chance to experiment, written and recorded in the 28 days of February. That long bus ride and early inspiration was the experimental pool I dipped into to create this album. Mixing and mashing all sorts of colors and flavors into a nostalgic elixir that mirrors the frenetic feelings of discovery I had listening to Digital Underground, Marilyn Manson, Violent Femmes, PJ Harvey, Salt-N-Pepa, Radiohead, Nirvana, Cypress Hill, The Smashing Pumpkins, Onyx, Hole, Snoop, The Dead Milkmen, Bjork, Rasputina, Mudhoney, B-52’s, The Cure, NIN, Sonic Youth and a million more all swirling and exploding into hot melting stains of memory and emotion.
HEXPHONES Is dedicated to all of you on that bus with me, holding on in the darkness with art, music, and love."

First of all, that may be the greatest collection of artists ever to draw inspiration from. Secondly, their RPM Challenge releases are always great, but they typically don't feel like produced studio albums. It's almost like little practices before the "real" albums come out, like Sonic Youth's SYR series. Hexphones is a full album, and celebrates Sickert's teenage influences. "Doomsday Disco" let's their love of bands like The B-52's and hip hop fly. "Non-Binary Death Star" sounds like a more organic Nine Inch Nails album. "666" and "Siren Street" dabble in the electronic world Radiohead have lived in this century. "Twisted (They Eat the Weak)" is pure thrashy punk glory.

You can listen to "Doomsday Disco" below. Hexphones is now available for the "name your price option" over at Walter Sickert & The Army of Broken Toys's Bandcamp. If you download for free, be sure to follow them on Facebook and Twitter.
Posted by Ken at 1:00 PM